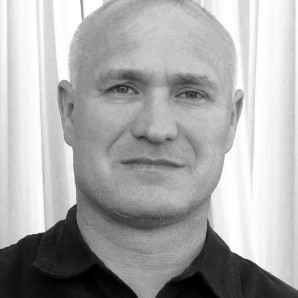 Pavel Barta was born in the Czech Republic and worked as a graphic designer in Prague before changing his focus to “hand made art”. Barta’s first exhibition took place in 1996 and consisted of a series of miniature sculptures created with materials such as wood, clay, paper and metal. It wasn’t until Barta moved to Canada in 1997 that he became interested in the sculpting mediums of stone and bronze.

Pavel’s sculptures are displayed in several galleries throughout British Columbia. His artwork has found place in private collections across Canada, Europe, the USA, New Zealand, and Australia. Each miniature sculpture is an original without the use of molds or patterns.  In addition to his miniature sculptures, Barta also works with fibreglass to create large scale outdoor installations which can be viewed in Campbell River, Kelowna, 108 Mile Ranch, 100 Mile House, Banff, Clinton, Heffley Creek and Sun Peaks Village.

In 2008, Barta was awarded the “The Okanagan Art Council Award”. In 2012 he completed two major public art projects: The installation of 16 sculptures located in the foyer of the Kelowna General Hospital, and the designing and installation of the entrance signs for the Village of Clinton. Barta currently resides out of Campbell River, BC.

“The best reward I can get is to know that thanks to my art someone’s day became brighter.”